If we were all here in person, I’d ask you to raise your hands if some portion of today’s scripture had been read at your wedding or your parents’ wedding or any wedding you’d been to in the past year.  I suspect I’d see a lot of hands.  As I often tell couples who stand before me at their weddings and hear this verse, the list of what love is probably feels overwhelming: compassion, kindness, humility, meekness, patience, compassion, forgiveness, love, peace, thankfulness, and praise.  It’s a tall order.  Are they sure that’s the tone they want to set on the very first day of their married lives?

But it’s not only couples getting married who should be nervous when they hear this passage.  It’s all of us.  This chapter does not describe romantic love – at least, not only that.  The apostle Paul wrote it to challenge a community of faith facing conflict and division.

He calls them to live together in love, a love that is patient and kind, not envious or arrogant or rude or irritable or resentful.  A love that rejoices in truth, not lies or conspiracies or flouting the rules.  A love that can bear anything, can endure anything, can believe and hope all things.

It’s a call to us, now, here.  In this chapter, Paul reminds us how we will act towards each other today as a Christian community and as a nation made of many.  We will act in love.  And if we claim we act in love, but instead embody selfishness or impatience or resentment or pride or arrogance – then we are just noisy gongs or clanging cymbals.  We’re just making noise.  We gain nothing.  We are nothing.

The very fact that we celebrate the young people of this church and their thirteen difficult and beautiful years of learning, challenge, and achievement with a video – this is an act of love.  Out of love, our seniors have set aside commencements and parties and ceremonies and robes and all the pomp and circumstance that this year should have been.  Because love does not insist on its own way, they have – in love – acted to keep their grandparents and godparents and friends and church families safe.  They have put aside childish ways and lived in a difficult, mature love, setting aside celebration and acclaim in favor of an act of love that keeps our entire community healthy and well as best as they possibly can.

What the sacrifice of our graduates shows us is what married couples learn very quickly, which is what Paul tries to explain to the beloved and embattled church of Corinth to whom he writes this letter.  Love helps us understand that our futures are bound to the futures of others.  Love shows us that what we want will not always grant a future full of hope for anyone else.  Love holds us accountable to the needs of others, constantly balancing our love for ourselves with our love for our God and our love for our neighbor.

When Paul wrote this letter, he wrote it to a church struggling to find any unity.  This diverse church in Corinth had believers from many different backgrounds.  Some of them thought your body should be treated puritanically with denial and restriction.  Others thought the body didn’t matter, and you should use and abuse it as you wish.  Paul responds by saying: these bodies matter.  What you do with them doesn’t just matter to you, but to God, and to others.  He advises them to be sensitive to the needs and concerns of others, adopting behaviors that might feel restrictive or unfamiliar, but which best embodied love for the sake of all.

Whether you are a married couple figuring out how to meld your habits and quirks, or a graduate figuring out how to let go of what you’ve earned for the sake of what is needed, or a society figuring out how do what is necessary for the wellness of all, not just a few – no matter who you are, Paul’s call to love is for you today.  And it’s tough.  It’s a word of challenge.  It’s a call to action.  It should make you feel overwhelmed.

We do not do this work alone.  We do it empowered by the Spirit who works through us, giving us the wisdom to see through selfishness and resentment, giving us the courage to act in fear and loss, giving us the endurance to live through uncertainty and exhaustion.  Graduates, that same Spirit goes with you as you look to a year ahead that cannot be fully known.  It will guide you in love and hope, just as it has always done.  That Spirit abides in us, people of God, as we support them as they continue on to whatever God has called them to – and it abides in us as we make hard, faithful, loving choices for the good of our neighbors. 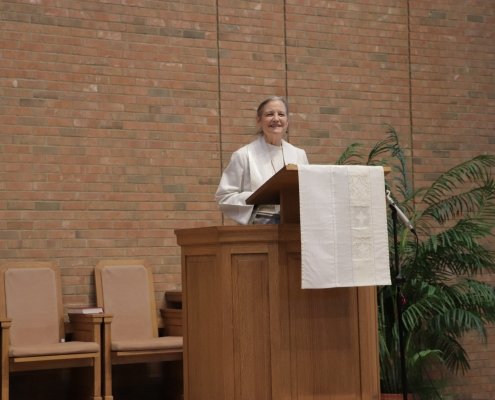 The book of Romans is a letter.  An actual letter.  Like, a letter written by hand and then sent to someone else for them to read.  Paul, the author of this letter, wrote a lot of letters.  Paul was an apostle, that is, someone who is sent – in this case, he is one who is sent to preach the good news of Jesus Christ to the furthest reaches of the known world.  He’s really, really good at it.

At the time that Paul writes this letter to the church in Rome, he’s been doing this work for probably twenty years and is at the peak of his career.  He’s developed a great pattern in his work: visit a place, get to know the people, continually share his faith with them, help gather a community of believers from all walks of life, and stay with them while they learn how to be followers of Jesus.  Then Paul leaves – after all, he’s got other places to visit and more people to teach.  He is an apostle – he is sent. But he doesn’t leave the church abandoned.  He writes letters back to these churches, especially when he hears about crises or conflicts.  Sometimes they need comfort, sometimes challenge, sometimes critique, but always he writes as one they know and love.  They welcome his input.

The letter to the Romans is not like that.  Paul has never been to Rome.  There is already a Christian church there, one brought over likely from Jerusalem very early in the faith.  And the church in Rome has recently seen conflict.  A few years before the writing of this letter, the Roman emperor expelled all the Jews from Rome.  Because Christianity was effectively a form of Judaism at the time, Christians were also exiled.  After the emperor died and the Jewish Christians returned, they found a church that had continued to grow and develop – this time with Gentile Christians.

It’s hard for us to understand how shocking and despicable this would have been.  Two weeks ago I preached on Acts 10, and how Peter’s vision of God calling all animals clean and good to eat flew in the face of millennia of culture, history, and society for Jewish Christians.  Jesus himself was Jewish and kept these laws – surely if anyone else wanted to be Christian, they could likewise follow these rules.  Peter’s vision and the general movement of the church revealed otherwise.

That didn’t mean it made things easy.  It is hard to let go of tradition and expectation and legislation as the Spirit moves us to new places. I hear people struggle when someone sits in their pew or wears sweatpants to church.  Let’s be honest: those are enormously trivial things.  If still we grind our teeth at the thought of these worthless infractions how much more might faithful people be driven to despair by moving on from the purity laws ordained by God?

This is the faith community to which Paul writes.  He writes to a church redefining and fighting.  It is a church that feels a deep rift, a painful split, one that goes deep into matters of identity and righteousness, one that threatens to dissolve into name-calling and condemning and finger-pointing and disgrace to the very name of God in whose name they mean to gather – and if we’re honest, we know how that feels. Those fears are not unfamiliar.

So how does Paul start his letter?  He has no standing in that church in Rome.  They don’t even know who he is – and if they do, it’s possible that they might still remember him as he was in his youth, an aggressive persecutor of the early faith.  What can he say that would possibly invite them to listen to him, to hear the word he will share, to receive the message that he hopes will join them together in the work of the gospel?

He keeps it simple: he tells them the truth.  He tells them who he is, and it is fully wrapped up in who Jesus is.  His self-introduction is the story of the gospel.  Nothing he can say about himself means more than who he is in Jesus Christ.

He tells them he wants to come see them, that he wants to be with them, that he hopes he can share some spiritual gift – but even more than that, so that they might mutually encourage each other in faith.  He doesn’t want to come to them because he’s better than them, because he can fix them so they can get things right, because they’re obviously sinful mess-ups who just haven’t been taught the truth.  No, he wants to join them for mutual encouragement in faith.  He wants to walk with them.  He hopes he has something to offer them in his teaching and leadership, but just the same, he knows he will grow by being with them as well.

What if that’s how it’s supposed to be?  What if we’re supposed to talk about what we believe and why, not because we’ve got it right and we want to establish our superior knowledge, but because we know that God works through our mutual encouragement in faith?  What if we were not ashamed of the gospel, not afraid of getting it wrong, not worried that someone would think we were weird for talking about what we believe and why and then asking others the same?  What if we trusted that the power of God was at work in this mutual encouragement?  What if we were not so proud and short-sighted as to think that the way we see God is the only way God works in the world?  What if we actually believed that God is at work in the world, that God has already been working long before we showed up, that we arrive as much to learn as to teach?

Ah, but I know the argument against it: we’re supposed to keep polite conversation, right?  What don’t you talk about at the dinner table?  Religion and politics, right?  Look where it’s gotten us.  It’s gotten us to a place where we can no longer have civil discourse, where we are more likely to condemn than to seek to understand, where we claim a Christian can only look one way, live one place, vote one direction, take one moral position.  It’s gotten us built up and walled off and fighting against our own beloved members of the family of God.

So don’t do it.  Take Paul’s example.  Tell people who you are.  Tell them where you’re from. Tell them what you believe.  And then invite them to do the same.  Make your story of faith as natural a part of your introduction as where you work and where you live and who’s in your family.  And when someone’s story is different, listen to it.  Hear it.  See God at work in it.  Be amazed.  Allow for the mutual encouragement of faith, because this is how the gospel is shared.

Handed On To You
Scroll to top